Some 10 years ago I was involved in the publication of the Crap Cycle Lanes book which exposed some of the worst cycle facilities in the country.

This year I was asked to write the foreward to a new version of the book with up to date examples. Crapper Cycle Lanes is now available and may be purchased either from Eye Books here or directly from 20's Plenty for Us for £8.50 including postage and packing.

The books make a great stocking filler for any cycling friends or relatives, and who know even your local authority head of transport.

To order just click on the Next button opposite and ensure that you enter your full address. If you want more than a single copy then just increase the donation accordingly. 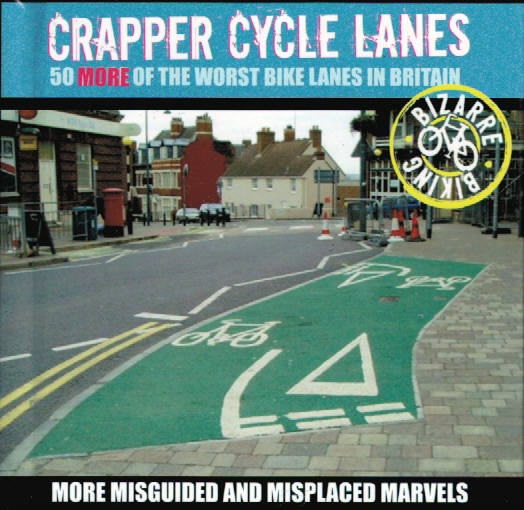 It was nearly 10 years ago that Eye Books published the first Crap Cycle Lanes book based on the "Facility of the Month" website pages of Warrington Cycle Campaign. Since 2001 this has featured pictures of badly designed cycle provision every month. Normally when introducing a sequel to a publication a foreword would say how delighted the authors are to be able to continue their previous publishing success. But in the case of Crap Cycle Lanes and its sequel, Crapper Cycle Lanes, this foreword has to be tinged with some regret that such monstrosities are still being foisted on the UK population.

So, this book is testament to the continuing ability of traffic authorities to get things wrong by putting in cycle facilities that fail the functionality, practicality and sometimes safety test.

We should note, however, that improvements have been made in places, and some cycle facilities are excellent. W like to feel the warm glow of satisfaction that maybe our little book helped in some way.

In our 2007 publication we called for the implementation of 20mph speed limits as the default for urban roads. In November 2007 20's Plenty for Us was set up to assist community campaigners who wanted 20mph limits and now over 320 local campaign groups have been formed around the UK. In fact this has been widely adopted by local authorities with most of the UK's iconic cities now setting 20mph limits for most roads. Now 16m people live in such places and our call is for this to become the national default. Wide-area 20mph limits have become best practice for making our streets better places to walk and cycle. See much more at www.20splenty.org

So please enjoy this book, we hope it will be the last of its kind we ever need to publish.